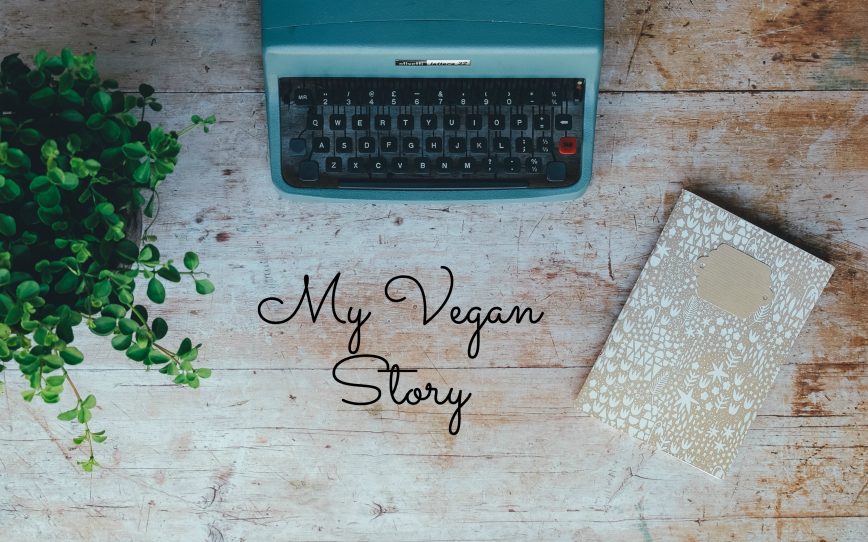 Today, November 1st, is World Vegan Day! After only eight months of eating a vegan diet and surrounding myself in a cruelty-free environment, I can no longer imagine any other lifestyle. I wanted to share my vegan story today as a way to celebrate World Vegan Day and living a more compassionate life!

My vegan journey began because I was struggling with chronic fatigue along with other health issues. Aside from an undiagnosed heart condition and blood disorder, l also have chronic iron-deficiency anemia. I was always tired, and when I say tired, I am talking all day, every day type of tired. I struggled to get out of bed each morning and my day was structured around when I could take a nap. *Spoiler alert* This is not normal! I knew it wasn’t normal. It was, however, MY normal.
This routine of barely living took its toll mentally and physically. My doctors were out of ideas after tests kept coming up empty. I was frusterated and losing patience that I would ever feel normal again. I was always active growing up, I even danced competitively until my health issues got in the way. It was hard not being able to do the things I wanted to do. You can forget about a social life, I was always too tired to bother making plans and when I did it was rarely enjoyable because I always felt so terrible. Some days, I could hardly muster enough energy to smile through my work day let alone a night with friends. Looking back on it now, I honestly don’t know how I managed as much as I did for as long as I did. To say the least, I became really depressed. This went on for years.

It wasn’t until being sick for weeks after traveling in March 2016 that I decided enough was enough. I had just come back from a trip to Las Vegas. When I got back, I expected to be run-down, it was Vegas after all! However, I just never got better. I kept thinking I would eventually bounce back and feel okay again, but I just never did. This was my breaking point. I was sick and tired of being sick and tired.

I started researching like crazy. I checked out every nutritional book at the library, watched documentaries and read blog post after blog post searching for ideas on how to heal myself. I always believed in the power of food and eating for health so I knew that was where I should start. After extensive research, I came to the conclusion that a plant-based diet might be worth a try. People boasted about noticing a boost in energy, mental clarity and generally just feeling well soon after following a vegan diet. At this point in my life I was mostly dairy-free for seven years, thanks to a few very unfortunate fettucine alfredo incidents that made me realize dairy made me violently ill.

I figured a vegan diet couldn’t be too hard. I was beyond desperate and couldn’t imagine feeling any worse, I thought what did I have to lose? I could try it for a few months and then if I didn’t notice any major changes I would try something else. I wasn’t 100% confident that it would work for me but the facts and science behind it all seemed reputable enough that I was ready to give it a shot.

Well, those few months turned into a few more months and now nearly a year in, I am never looking back! I can confidently say a plant-based diet transformed my life. I noticed a boost in energy along with the other usual benefits people rave about like clearer skin, weight-loss, less mental fog and no more digestive issues. I not only felt better, I felt well! Not to mention, my personal values finally aligned with the way I lived my life, cruelty-free and compassionate.

I mentioned that, among other health issues, I had iron-deficiency anemia. This might sound like a poor candidate for a vegan diet. However, that is where SO many people are misinformed about nutrition. We are raised to believe protein and iron can only come from animal meat but this is so far removed from the truth! I am eating more iron-rich and protein-dense foods now as an herbivore than I ever did as a carnivore. I am also more educated on what fuels my body and how to eat for what my body needs.

Plus, I love and enjoy what I am eating! There are so many different kinds of vegetables and legumes that I have never bothered trying before. I realized from this process that I never really liked meat to begin with, I just ate it out of convenience. I’ve found so many great meals that leave me full, satiated and feeling better than I ever have.

Interested in learning more about a plant-based diet or vegan lifestyle? Leave your questions below or send me an email! I’d love to chat with you!

← Previous Post
6 months Vegan: What I Learned
Next Post →
Vegan Tips for Beginners – 3 Easy Phases To Transition Your Lifestyle