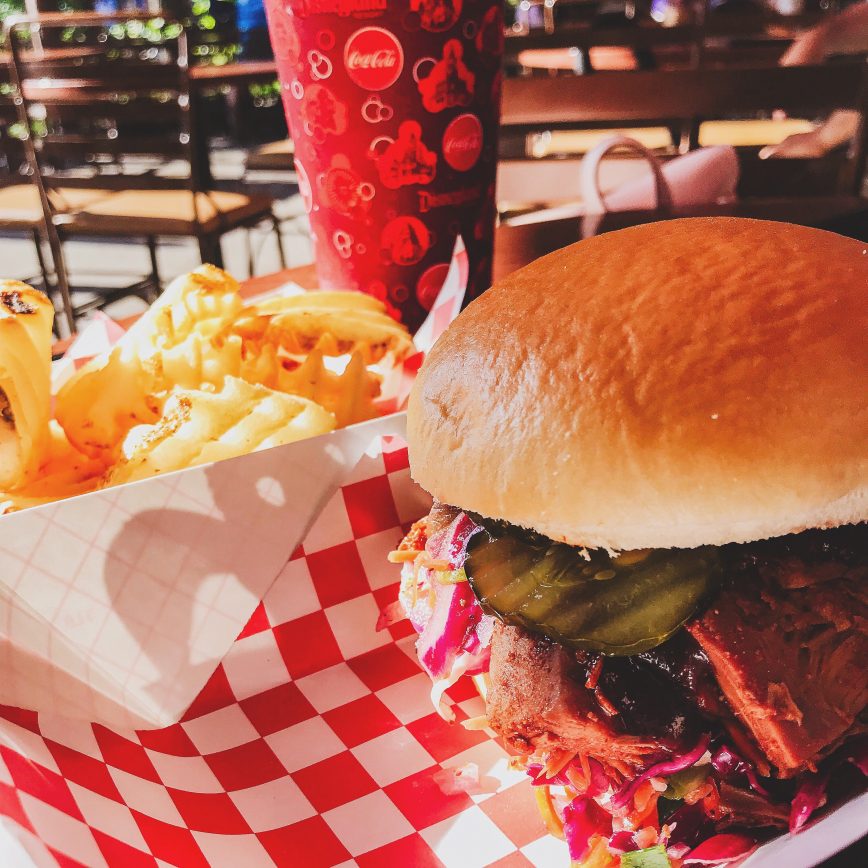 I’ve spent the past few weeks being a tourist in my own city and in doing so, discovered some tasty options in unexpected places! Theme parks aren’t exactly known for being diet inclusive, but thankfully, I had no problem on my recent adventures finding decent vegan meals. I wish I could have eaten and tried more, but at least I loved what I did try! My first stop was California Adventures!
BBQ Jackfruit Burger in Grizzly Peak at Smokejumpers Grill- I really appreciate how serious Disney and California Adventures takes diet restrictions! I was able to talk directly to the chef and the cashier was super helpful when I inquired about ingredients. I ordered the BBQ jackfruit sandwich on a regular bun as it traditionally comes with a brioche bun, which has dairy. The coleslaw is vinegar-based so no need to alter anything else. It was filling, delicious and way more healthy than some of the other options.

Award Weiners in Hollywood Land- While I did not try it, they do have a vegan version available if ordered without cheese. Dole Whip at The Tropical Hideaway in Adventureland-  Yes, the Dole Whip is as good as everyone says. I almost skipped it because the hype seemed so high for a simple sorbet but this was way better than I imagined. I was so impressed with how creamy it was and how fresh the pineapple flavor was. I expected it to taste more processed but it was super refreshing after a long day of walking and rides.

Mickey Pretzels at various food carts- How can you say no to a Mickey Mouse shaped pretzel? At City Walk, which requires no ticket to access, my first stop was Voodoo Donuts! I was SO impressed! I tried the apple fritter, voodoo doll, portland cream and traditional yeast glazed. ALL were so good and I could not believe how many vegan flavors they had!

For lunch, Cocina Mexicana
I ordered the impossible meat taco salad with no sour cream. It comes with lettuce, black beans, guacamole. There was also a dressing on the side but I didn’t notice it until the end and don’t believe it was vegan. However, I was so full that even after we stayed until closing at 10pm, I wasn’t hungry for anything else.

Snacks, Palace Theatre Cafe
They have a variety of more healthy snacks like Kind bars, fresh fruit, and my personal favorite large pickles!

While this isn’t a complete list of all the offerings available, it gives you some ideas if you plan to visit!